Little O’s Frozen Treats will be running as a separate company from Ollie’s Frozen Custard and will offering a limited menu to serve everyone efficiently.

Frozen custard was invented in Coney Island, New York in 1919, when ice cream vendors Archie and Elton Kohr found that adding egg yolks to ice cream created a smoother texture and helped the ice cream stay cold longer. In their first weekend on the boardwalk, the Kohr brothers sold 18,460 cones. A frozen custard stand at the 1933 World’s Fair in Chicago introduced the dessert to a wider audience. Following the fair, the dessert’s popularity spread throughout the Midwest; Milwaukee, Wisconsin, in particular, became known as the “unofficial frozen custard capital of the world”. Per capita, Milwaukee has the highest concentration of frozen custard shops in the world and the city supports a long-standing three-way competition between Kopp’s Frozen Custard, Gilles Frozen Custard (pronounced Gill-Ease), and Leon’s Frozen Custard. In addition, Culver’s, a fast casual restaurant long-noted for its frozen custard is based in Prairie du Sac, Wisconsin and has outlets in Milwaukee and throughout the Midwest.

In the United States, the Food and Drug Administration requires products marketed as frozen custard to contain at least 10 percent milkfat and 1.4 percent egg yolk solids. If it has fewer egg yolk solids, it is considered ice cream. True frozen custard is a very dense dessert. Soft serve ice creams may have an overrun as large as 100%, meaning half of the final product is composed of air. Frozen custard, when made in a proper continuous freezer will have an overrun of 15-30% depending on the machine manufacturer (an overrun percentage similar to gelato). Air is not pumped into the mix, nor is it added as an “ingredient” but gets into the frozen state by the agitation of liquid similar to whisking a meringue. The high percentage of butterfat and egg yolk gives frozen custard a thick, creamy texture and a smoother consistency than ice cream. Frozen custard can be served at -8°C (18°F), warmer than the -12°C (10°F) at which ice cream is served, in order to make a soft serve product. Another difference between commercially produced frozen custard and commercial ice cream is the way the custard is frozen. The mix enters a refrigerated tube and, as it freezes, blades scrape the product cream off the barrel walls. The now frozen custard is discharged directly into containers from which it can be served. The speed with which the product leaves the barrel minimizes the amount of air in the product but more importantly ensures that the ice crystals formed are very small. Frozen custard is usually prepared fresh at the place of sale, rather than stored; however, it is occasionally available in supermarkets or by mail order. Generally, modern frozen custard stands provide up to three different flavors per day: vanilla, chocolate, and a unique “flavor of the day.” The older vintage custard stands tend to have a dozen or so standard flavors. 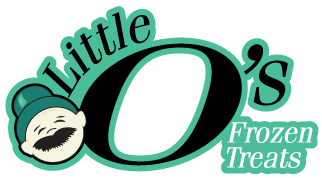 Little O’s Frozen Treats will be running as a separate company from Ollie’s Frozen Custard and will offering a limited menu to serve everyone efficiently.